If you live in a region with harsh winter weather, then you may want to consider a spitz breed. Many of these dogs were bred for life in arctic climates and originated in Scandinavia, Russia, North America, and Asia. The word “spitz” in German means pointed. Physically, most spitz breeds have a wolf-like appearance that includes pointy, pricked ears, almond-shaped eyes, a heavy, double coat, and a feathery tail carried over the back. All of these features help keep them warm when the temperatures drop.

Spitz breeds are often loyal, intelligent, and affectionate, but they can also be independent and bold. Not always suited to the novice owner, these active dogs have working backgrounds, and their tasks ranged from helping hunters find game to hauling sleds with heavy loads to herding animals like reindeer. Their thick coats also need regular grooming to keep the shedding at bay!

There are between 50 and 70 distinct spitz dog breeds, but some aren’t easily categorized because there is no exact definition. These 16 AKC recognized breeds are synonymous with the spitz classification and showcase why so many people have made these types of dog a member of their family.

The Akita is a muscular, imposing, large dog from Japan, where they are seen as symbols of good health, happiness, and long life. Originally bred to hunt big game, these dogs are known for being courageous protectors with a strong work ethic. Unfailingly loyal toward their family, Akitas are wary of strangers and don’t always get along with other animals. These traits, combined with their independent nature and power, mean that appropriate socialization from an early age is important.

Another powerful, hard-working spitz-type, the Alaskan Malamute is known for being affectionate, loyal and playful. One of the oldest sled dog breeds, the Mal’s strength and stamina allowed them to slowly haul heavy loads over long distances. Loving family dogs, Malamutes are also independent and energetic. 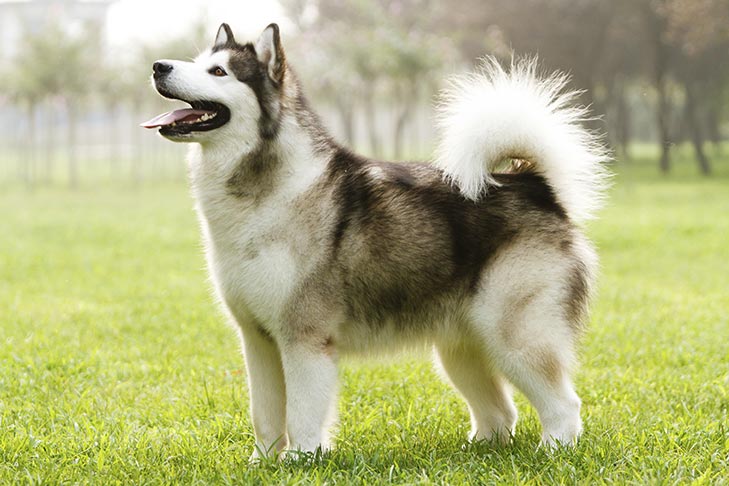 The name American Eskimo Dog is misleading. They are actually descended from the German Spitz, brought over by immigrants to North America for use as all-around farm dogs. Eskies are trainable, curious, and, once you have won them over, friendly—it’s no surprise they were circus performers in the past. They come in toy, miniature and standard sizes. Their intelligence, desire for affection, and energy mean these dogs benefit from being part of an active family, where they will have plenty of company. 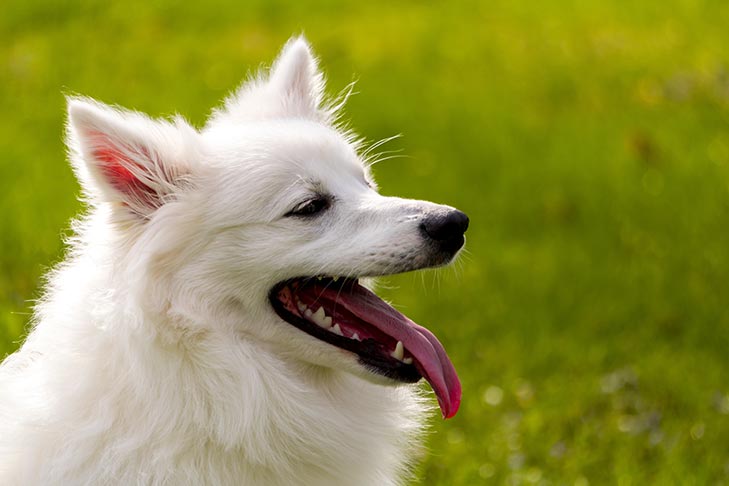 The Chow Chow is a unique and ancient breed that could be one of the original spitz-types. There are artifacts from China’s Han Dynasty depicting these dogs from around 200 b.c. Their long history has seen them be prized companions of the Chinese noble, guard dogs, and hunters. The Chow Chow is instantly recognizable because of it’s lion’s-mane ruff, blue-black tongue, and powerful but compact physique. The breed is known for being fastidiously clean, calm, and loyal, but often also aloof, stubborn, and serious. With its thick coat, the Chow Chow does not tolerate high heat well. 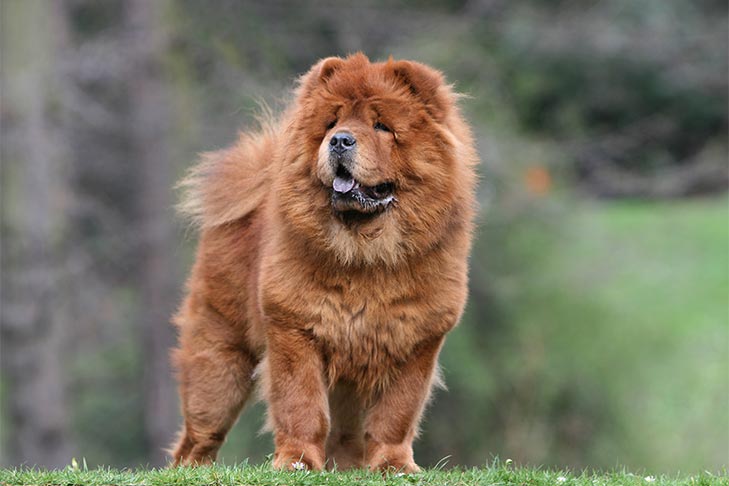 Originally bred to herd reindeer in Lapland, north of the Arctic circle, the Finnish Lapphund gets its name from the Sami, or Lapp, people who occupied these harsh, barren regions. Known for their innate sociability, Lappies used to huddle close to their nomadic human companions through the extreme cold of the night. These days, the breed has gained a following for being intelligent, courageous, and calm. Herding trials, agility, and rally are just a few of the canine sports in which they excel. 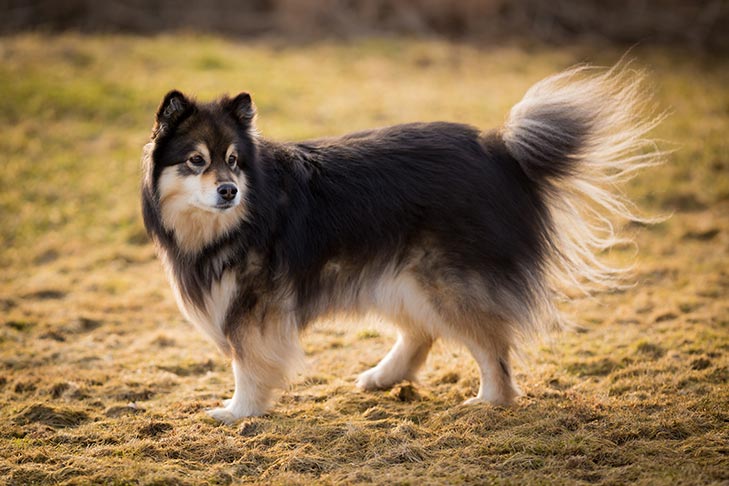 This small, fox-like breed from Finland excelled as an all-round hunter with bags of stamina, courage, and enthusiasm. The Finnish Spitz has a unique tracking style and indicates game birds with a range of rapid barks, yodels, and other vocalizations. Consequently, they earned the nickname of “Barking Bird Dog.” Finkies are excellent watchdogs that bond strongly with their families. Friendly but sometimes initially wary of strangers, these sensitive and intelligent dogs need appropriate socialization and fun and positive training to prevent problems with nuisance barking from arising. 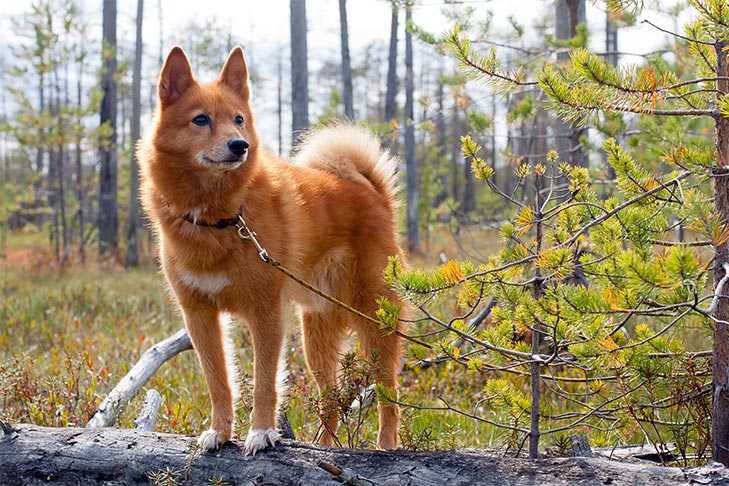 The medium-sized, densely coated Icelandic Sheepdog is Iceland’s only native dog breed. The ancestors of these versatile herders came to the country via Norse settlers. Friendly, happy, and utterly devoted to their humans, these dogs love spending time outdoors, make great hiking companions, and don’t do well being left on their own often. Intelligent and eager to please, the breed also excels in canine sports. 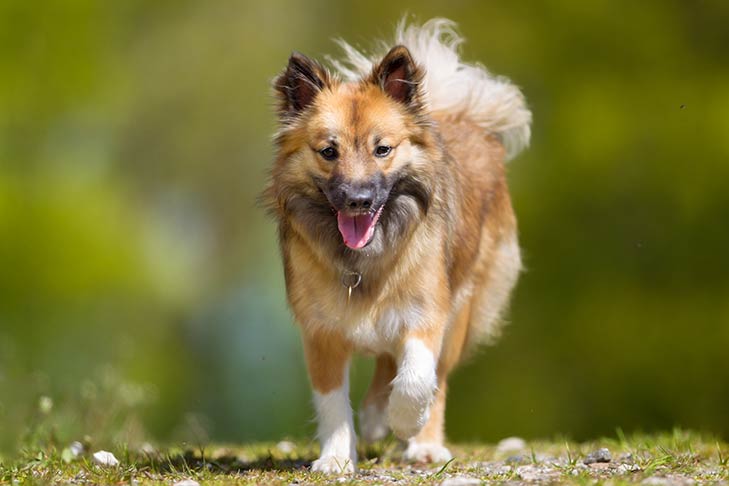 The medium-sized, densely coated Keeshond was the ideal dog for living on the barges of the Dutch waterways as a guardian and companion. They are hardy, nimble-footed, adaptable, and amiable. A unique characteristic of these smart and highly trainable dogs is the markings around the eyes that give them the impression of wearing spectacles. 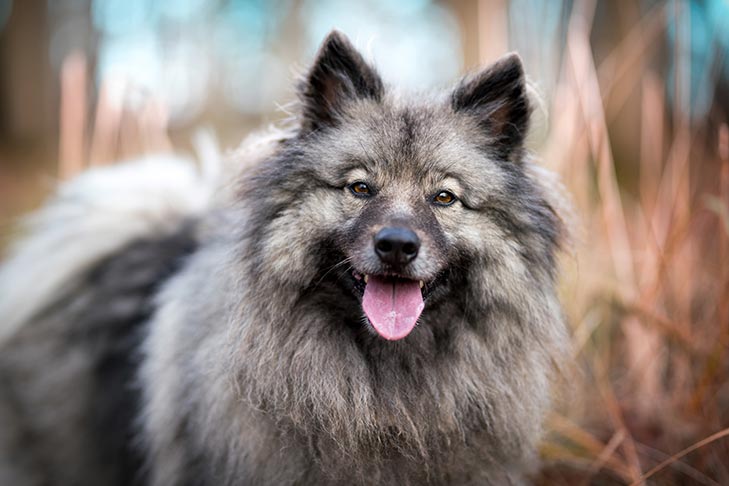 The origins of the Norwegian Buhund closely link with the Vikings, but they came into their own as all-purpose farm dogs in the Norwegian countryside. This versatile medium-sized breed acted as a confident herder, guardian and steadfastly loyal and affectionate companion. The Buhund is an energetic and smart spitz-type with tons of stamina. As such, they thrive in active homes that provide the mental and physical stimulation they need. Unlike some of their more stubborn spitz relatives, this breed is eager to please and responds very well to positive training techniques. 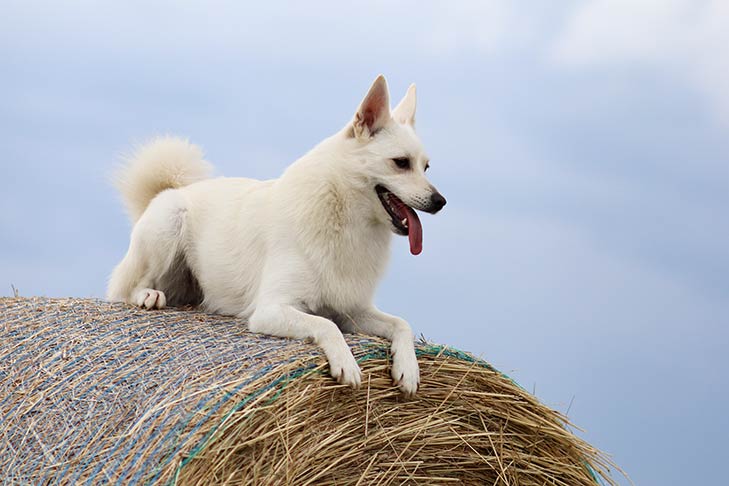 One of Europe’s oldest breeds, the Norwegian Elkhound sailed and hunted with the Vikings before herding sheep and guarding farms in rural Norway. Larger than the Buhund, the Elkhound’s distinctive silver-gray coat is dense enough to keep them comfortable in the harshest weather conditions, and their natural athleticism, stamina, and working traits make them ideal agility and herding competitors. Friendly, confident, and eager, these dependable dogs are often reserved with strangers but unfailingly loyal to those that win their trust. As with many spitz types, this intelligent breed does have an independent streak and a strong prey drive. 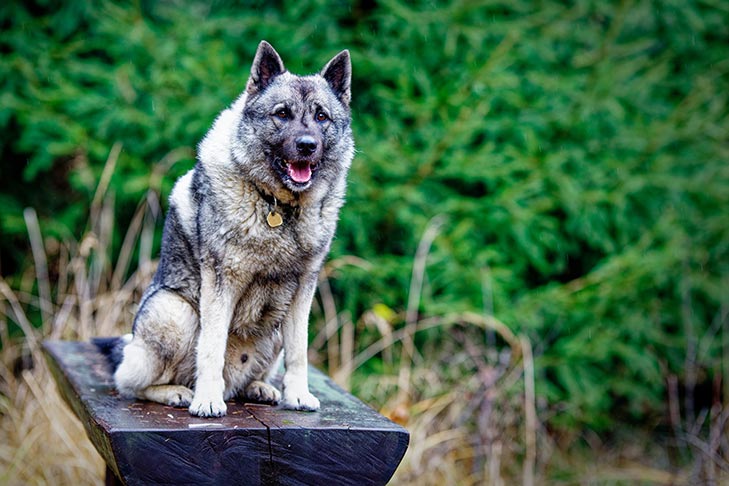 Of all the spitz-type dogs, the Norwegian Lundehund is one of the rarest and most unique. Hailing from the rocky, remote Norwegian Island of Vaeroy and created specifically for hunting puffin, the breed has several distinctive traits to aid with this task. They have six toes and an extra paw pad, ensuring a solid grip when scrambling on rocky cliff edges. Their neck is capable of craning back so that their head can touch their spine, and their shoulders flex to allow the forelegs to extend out perpendicular to the body—perfect adaptations for squeezing into tight spots. These dogs are friendly, fun-loving and affectionate, but it can take some time for them to build bonds of trust. Intelligent problem-solvers, Lundehunds need plenty of mental and physical stimulation to keep them out of mischief. 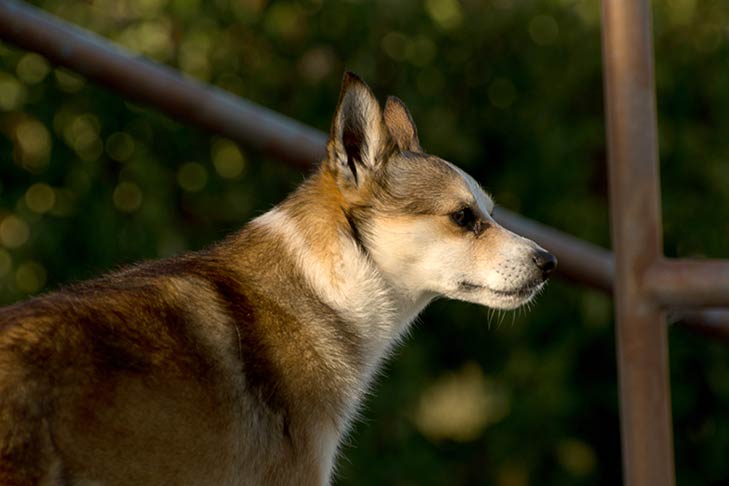 The fluffy Pomeranian is one of the world’s most popular toy breeds—and for good reason! These dogs may weigh less than seven pounds, but they have a commanding presence and a big personality. Unlike many spitz dogs, the Pom has always been a companion breed and royals and notable historical figures, including Marie Antoinette and Wolfgang Amadeus Mozart, were enthusiasts . It was Queen Victoria’s passion for the breed that cemented their popularity worldwide. While they may thrive on companionship, Poms are more than just lapdogs. The breed is highly intelligent, mastering tricks with ease, and they often compete in canine sports or work as therapy dogs. They are also pocket-sized watchdogs and, at times, prolific alert barkers. 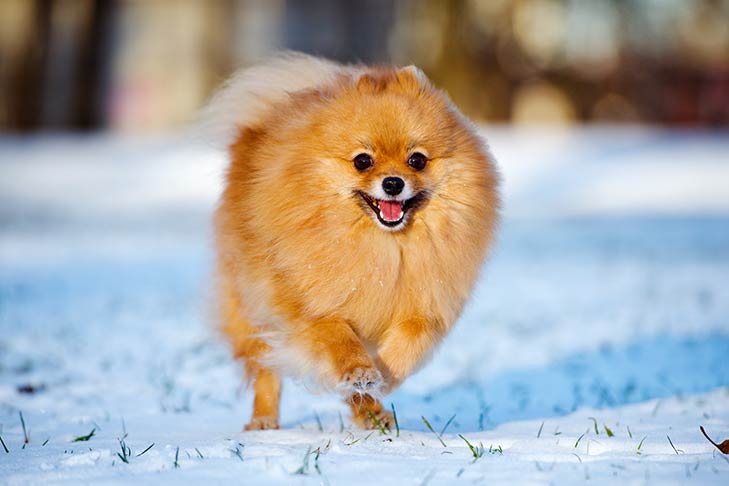 The Samoyed stands out because of its thick, white coat and smiling expression—both practical features designed to help them cope with the frigid temperatures of their native Siberia. The upturned corners of the mouth actually assist in keeping Sammies from drooling and preventing icicles from forming on the face. These powerful and graceful large breed dogs earned their keep with the Samoyedic semi-nomadic people by pulling sleds, hunting and herding reindeer, and guarding. They formed tight bonds with their people and huddled close with them at night for mutual warmth. Their adaptable and social nature makes them popular companions to this day. A well-fenced yard and plenty of exercise and attention are musts for this breed that appreciates roaming and love in equal measures! 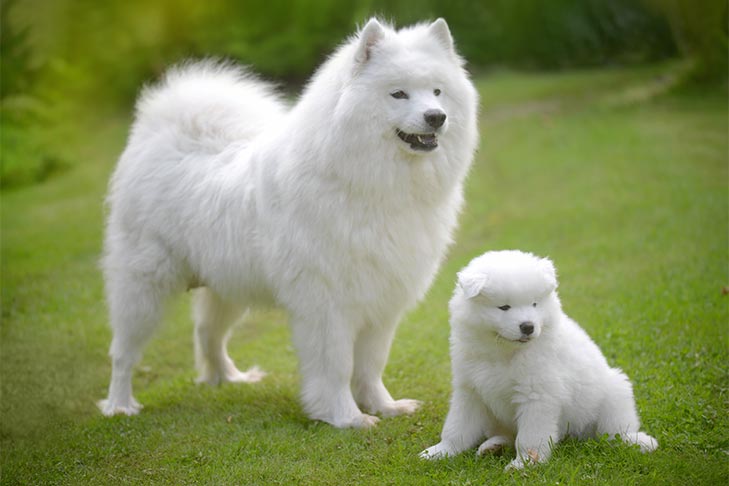 The Shiba Inu is an ancient Japanese breed originally used as an adaptable, muscular little hunter. Now the most popular breed in their native country, an increasing global fanbase is falling for the charms of this very foxy-looking Spitz breed. Shibas are usually adaptable, active, good-natured, clean, and quiet. They can also be aloof, independent, master escape artists, and somewhat stubborn.

Originally bred by the semi-nomadic Chukchi people in the frozen territories of northeastern Asia, the Siberian Husky is widely regarded as the ultimate sled dog. With exceptional endurance, these dogs can pull light loads at impressive speeds over long distances in packs. Their innate friendliness draws many people to the breed, and they are known for being amiable, playful and energetic. In the United States, the Siberian Husky is the most well known and popular of all the Spitz breeds. They aren’t without their challenges, though. Huskies tend to have a high prey drive and a desire to roam, and they need lots of mental and physical stimulation. 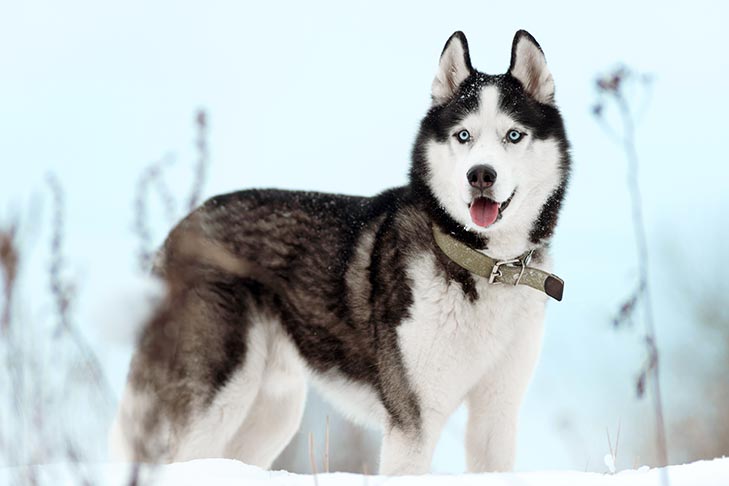 The Swedish Vallhund is another Scanidanvian spitz with Viking heritage. These low-slung dogs are relatives of the Welsh Corgi and share the breed’s skills as adaptable, all-purpose farm dogs and cattle herders. Strong-willed but cheerful, Vallhunds are energetic, confident dogs that make loyal companions.